Dropping cash on 2020-21 Tim Hortons, the easiest cards to find in Canada

Every fall for a few years now Tim Hortons has released a set of hockey cards produced by Upper Deck. If you don't know, Tim Hortons is a chain of coffee shops that was originally founded by the late Tim Horton, a Hall of Fame defenseman for the Leafs who died in a car crash after retiring from hockey. Tim never saw his company take off the way it did, and now it's one of the most recognizable brands in Canada.
Truthfully, a lot of Canadians hate Tim Hortons, even if they guzzle Tim's coffee daily. The company has changed hands several times and in the past few years has been notorious for reducing the quality of their goods, as well as having made the news for some high profile stories about the mistreatment of staff and the decline of their once popular "Roll Up the Rim to Win" prize contest.
Nevertheless, despite the popular criticism of the Tim's franchise, their cards remain ever popular in Canada. They are probably the most collected sports cards in the country, simply because they are the most visible. Usually card values are high when the set first releases, and decline over time except when it comes to their ultra rare inserts.
The cards come in packs of three, $1 with a purchase and $2 for each pack after that. There are like ten thousand Tim's coffee shops in this country, however, and none of them seem to follow the rules accurately. Like, some Tim's impose limits on how many packs you can buy. Others let you buy whatever. Some you have to buy a coffee or something else first, others you can just walk in and buy the backs. It's whatever.
McDonald's used to release a set of hockey cards dating back to the early nineties until about ten years ago, but they dropped out. Tim's picked up doing a card set a couple of years after that. There isn't much difference in quality from McDonald's to Tim's, really. Canadian Tire also did a couple of hockey cards releases in the past few years, but stopped. I really enjoyed the Canadian Tire cards and thought the cards were way better than what Tim's releases, even if they were both produced by Upper Deck.
I buy stacks of packs every year just for the fun of a cheap rip. But I never end up trying to build the set, and end up trading away or selling most of what I pulled. Also, I was a bigger hockey fan as a kid, but as an adult I have grown (very) tired of the sport and its unique style of petulant Canadian jingoism. Also, Upper Deck is by far the crappiest of the major card companies. For all the complains about Topps and Panini, Upper Deck is something else entirely. I still enjoy vintage hockey cards, though, and will always love O-Pee-Chee.
I opened maybe fifty packs last fall and here are some of the better hits. 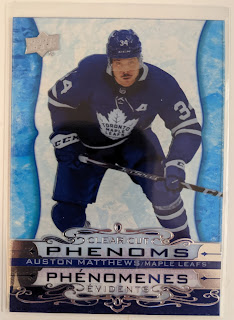 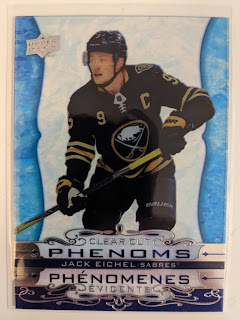 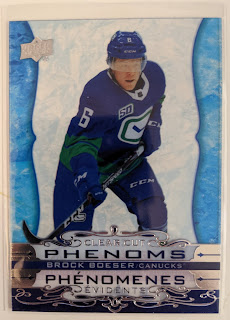 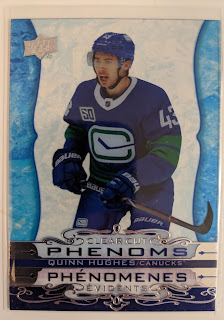 These are four Clear Cut Phenoms cards I pulled. They are acetate cards similar to Ice, a product Upper Deck has put out every year since the nineties. I think these are probably the nicest looking cards in the Tim's product, even if they aren't the most valuable. Ice is usually an expensive product to buy, probably because acetate cards are expensive to produce. I've been absolutely ripped off on packs and boxes of Ice, dropping a large amount of money to get pennies back and no cards for my personal collection. So, these Tim's acetate cards are a nice alternative to Ice. 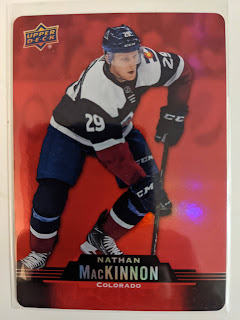 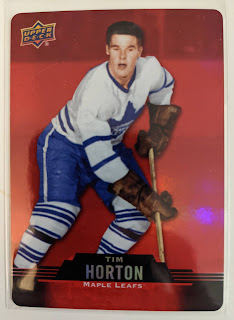 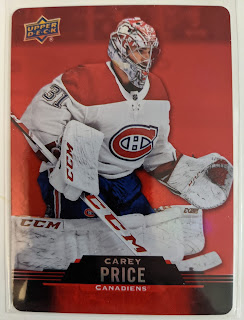 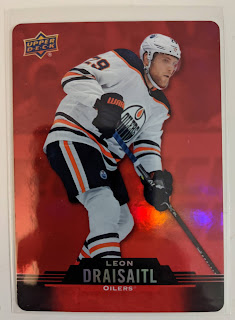 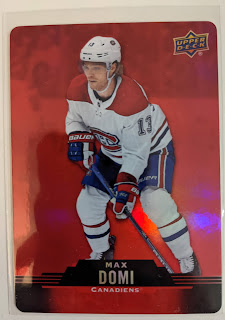 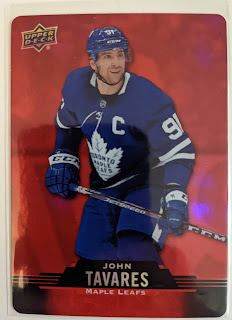 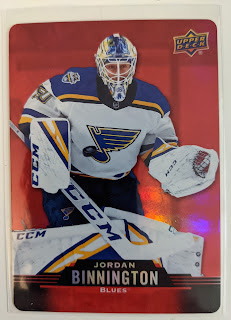 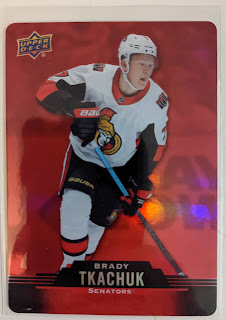 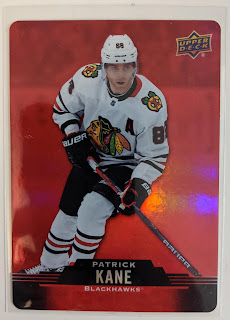 These are the Red Die Cuts. I believe these are the most common insert cards, if I am not mistaken. Well, technically they are parallels. They look pretty good. They're really only die cut in the way that their corners are shaped like playing cards. I actually really like die cut cards, but I find I enjoy them when the cut is really cool rather than kinda lazy. These cards are on the lazy end. I think examples of cool die cuts are the Hot Gloves baseball inserts from the nineties, and the McDonald's goalie glove inserts from their old hockey releases.
I'm also not super big on the red background, but that's just me.
They included Tim Horton in this set, as a base card and as a parallel and maybe some inserts. That makes sense because the company is named after him. I wish they included more Hall of Famers in the Tim's release, as I am much more interested in classic players compared to the current crop. But that's also just me, as obviously the guys currently playing are going to have a broader appeal to the mass market compared to a bunch of retired guys.
Do you guys collect Tim's hockey cards? What about you American hockey collectors, do you like getting these shipped down from us here up north?
By Jeremy at April 30, 2021
Email ThisBlogThis!Share to TwitterShare to FacebookShare to Pinterest