A Brief Glance at My Blue Jays Autograph Collection

I have a small collection of autographs of guys who played for the Blue Jays World Series teams in '92 and '93 that I have so far neglected to show on my blog. I was a huge baseball fan when I was a kid and loved the Jays, because growing up in Ontario at that time we only had two genuine options for sports, the Jays and the Leafs. The Leafs stuck and played during the winter. Jays were much better and played through the summer. The Raptors didn't exist when I was a kid, and CFL is really only popular out west. So, it was Leafs for part of the year, Jays for the next part.

I was never a big Leafs fan because they always stunk. They are probably my favourite NHL team, but among the teams I follow in various sports they are amongst my least favourite of my favourites, if that makes any sense. 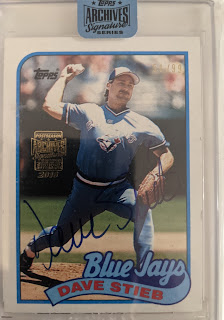 First up is one of two Dave Stiebs I own. Stieb was more of an 80s Blue Jays guy, but he threw a no-hitter in 1990 and I believe he got a ring for the 92 title. I don't think he played any playoff games, but he got in some regular season games. Stieb was a great pitcher and I don't think he quite gets the recognition he deserves because the Jays didn't get good until the mid '80s, plus I doubt Toronto was a great baseball market until they actually won the World Series. Stieb also had a great rivalry with Jack Morris of Detroit back in the day. 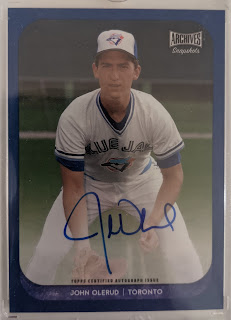 Olerud had a great year in '93, but he was never quite as good after that. He was a fan favourite for the Jays through their championship runs and I wish he had stayed with the team longer into his career. 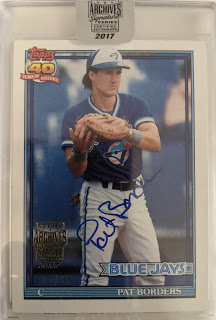 Borders had an insane 92 World Series, winning the World Series MVP that year. He was never as good before or after. It was so weird because I remember watching the Series and it felt like every time he came up to bat, there was a chance it would be a home run. Like Olerud, he was another player that was a champion with the team twice and then spent the rest of his career bouncing around different teams. 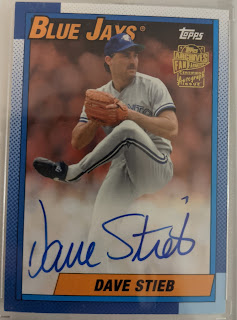 This is the other Stieb. This photo looks like it's from much later in his career compared to the autographed card at the top. 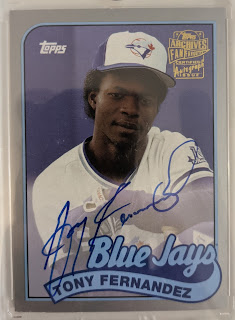 The late, great Tony Fernandez. He's the first Jays World Series winner to have passed away. He was with the team in 93, but not in 92 as he was part of the famous trade that brought Alomar and Carter to Toronto. He actually played for Toronto four times, but his best years were in the 80s. I'm really glad he got a ring in 93, though. 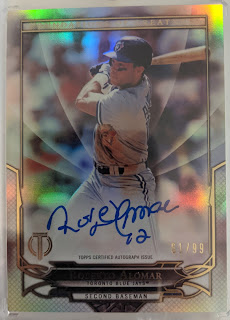 Well, what can someone say about Alomar these days? I'm actually surprised that so many other people are surprised about what has come out about him. Even back in the day it was common knowledge that he wasn't a great human being. Like, if someone had told me that a member of the Jays World Series teams did what Alomar has been fired for, but I wasn't told the name, my first response would be, "Probably Alomar". I know we all collect baseball cards, but I don't have this pretense that all the players I collect or watch are decent human beings. In fact, some of them are probably deplorable human beings, which is why we have to keep this stuff in context. After all, it's just a game.

By Jeremy at May 10, 2021
Email ThisBlogThis!Share to TwitterShare to FacebookShare to Pinterest